According to the twenty-four solar terms of the Chinese calendar, seasonal food is intricately connected to the movements of nature.

As the White Dew solar term sets in around September 7, we should clear the accumulated heat of the summer and store a good amount of energy for the coming cold season. The fruits and vegetables that grow at this time support our bodies in this task.

With that in mind, our Magnifissance editors have prepared four healthy recipes that accord to the solar terms of the autumn season.

In the White Dew solar term of early September, the summer heat has faded, the yin energy is getting heavier and the dew becomes condensed. The temperature difference between morning and evening has increased.

To cope with the drier air, you can drink fruit tea and soak your feet with hot water before going to bed. Both are moisturizing and pleasant methods to keep you in good health.

Here, we present to you a classic Oolong White Peach Tea. A pot of light-roasted oolong tea clears the heat, while the ripe white peaches of the season are gentle and nourishing for the stomach. With a light honey fragrance, the flavour of this tea is pleasant and gives a feeling of goodness and comfort. 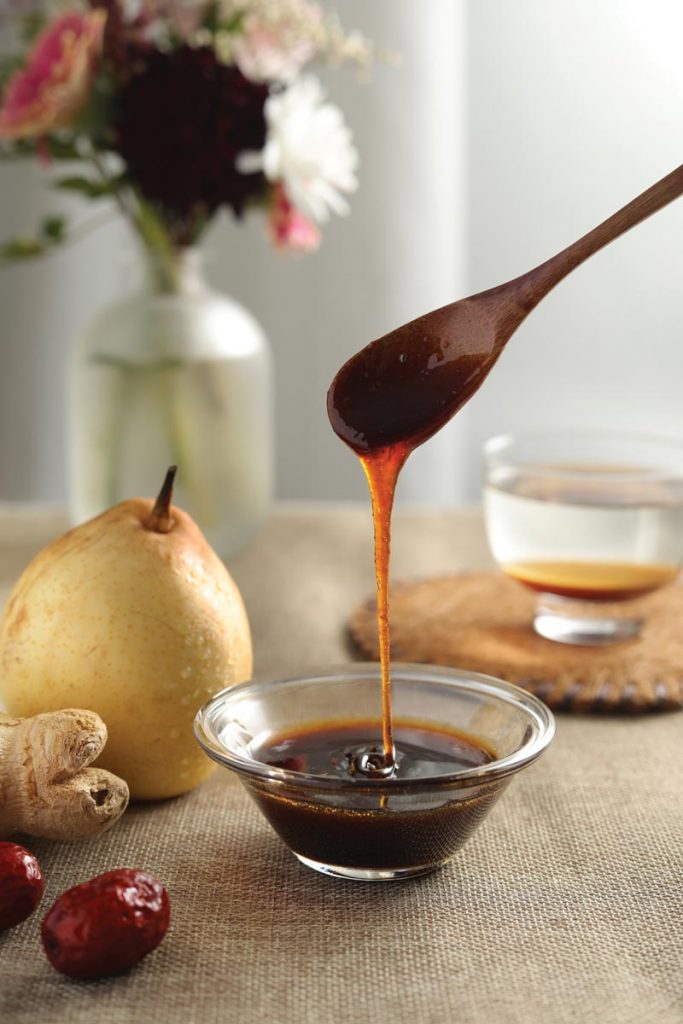 From White Dew to Autumn Equinox, the yang energy grows weaker as the days and nights turn increasingly cool. The yin energy gradually rises and the temperature drops rapidly. The resulting autumn dryness may cause discomfort in the respiratory tract and lungs. Thankfully, nature has provided a corresponding solution. Many fruits and vegetables produced in autumn have a moisturizing effect. These include the snow pear, white fungus, and the lily.

In ancient China, people prepared Autumn Pear Paste as a relief for autumn dryness. The snow pear is sweet in taste and cold in nature. It hydrates, clears heat, and reduces phlegm. This recipe blends pear with ginger and red dates, which are both warm in nature, and with luo han guo (monk fruit), which nourishes the lungs and clears heat from the body.

“Autumn has been said to arouse only desolation,

I would say autumn day is much better than spring morning.

When a crane soars into the blue sky, flapping its wings at the clouds,

My poetic sentiment follows it to the high heavens.”

Autumn is harvest season, so it’s time to pick some delicious oyster mushrooms. If you don’t know how to forage them, you should be able to find fresh ones at the supermarket. For this Oyster Mushroom and Tofu Casserole, mix the mushrooms together with tofu, shrimp, and carrots, then add them to a pot of bone broth. A warm and delicious autumn nourishing dish will soon be ready to serve.

Frost’s Descent is the last solar term in autumn. It arrives at the end of October when the coldness of winter is on its way. As the yang energy weakens, the night becomes longer, and the diet and schedule need adjustment. The ancient text The Yellow Emperor’s Classic of Internal Medicine states, “In the three months in autumn, you should go to bed early and get up early, rising when the rooster crows.” In this way, you can calm your heart and nourish your energy. During this solar term, try to avoid spicy food and focus on warming soup and porridge.

Yam is sweet and mild in nature and has the effect of nourishing the spleen, kidney, lungs, and of restraining sweat. That’s what makes it a good supplemental food during this solar term. Beef is also a good supplemental food, nourishing the blood and energy, invigorating the stomach and spleen, and strengthening the bones and muscles. The combination of the two makes for a nourishing and mellow noodle soup, bringing warmth and thoughtfulness to the table.

This story is from Magnifissance Issue 108

The Ultimate Guide to Creating a Tea Ceremony at Home

From China to Chile a Rare Tea Story